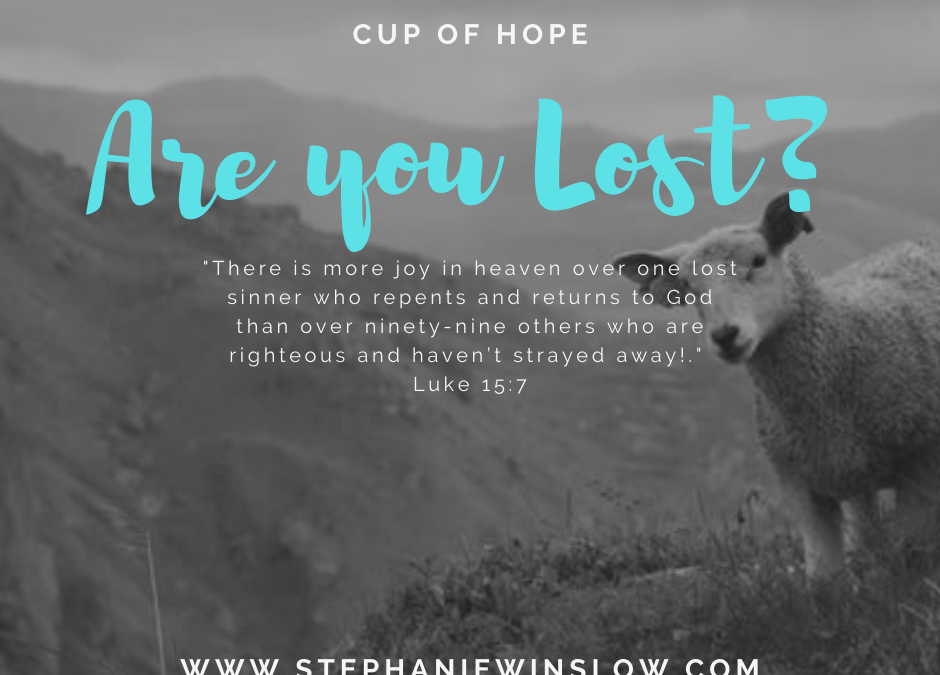 Whatever you are running toward, or running from, do you want to be found?

All of humankind experiences levels of both being found and finding what’s lost.

Whether we were a small child and were lost in and amongst a crowd. I remember when I was about 5 or 6, getting lost in a crowd at a Cardinals baseball game. The crowd was thick with people, and I had lost my dad’s hand as we had to bob and weave through the ecstatic baseball fans. I decided instead of trying to look up and see peoples faces, I should look down at peoples shoes & pants.

I looked up. My heart sank, my eyes grew the size of mandarin oranges and just as tears were beginning to well up in my eyes, I heard my dad call my name. I looked over, and there he was. I was elated. I was overjoyed. I was rescued. Why? Because I was found.

I can still remember the feeling of relief that washed over me in a wave. My tears of shock and sadness turned to joy and happiness. In the middle of the crowd dad knelt down and hugged me. Then he took my hand.

As we began to navigate our way again through the thick crowds of rowdy fans, I grabbed onto my dad’s thumb with a sort of WWF death grip. “I’m not getting lost this time.” I thought to myself.

This feeling of being lost is something we all can resonate with. Most of us have experienced being lost from someone we love. But each and every one of us experience being “lost” from God. Being separated from him because of sin.

In Luke 15, Jesus walks the Pharisees and scribes through three parables to expound on the implications of being lost, and the blessedness of being found.

Verses 1-7 in chapter 15 of Luke Jesus sets the scene of one precious sheep from a fold of 100 that was lost, separated from the fold. The Shepherd in the parable leaves the ninety-nine sheep to go get the ONE.

When he finds the lost sheep, he rejoices and celebrates telling all of his neighbors. “Rejoice with me, because I have found my sheep that was lost!” (vs 6)

Just like my dad came looking for me in the sea of people at the Cardinals game, the shepherd, Jesus, comes after us, the ONE. We are all the ONE, the one Jesus leaves the fold for to find. We are each precious to him. He would have died on the cross for ONE.

He rejoices, he celebrates over the whos brought to the fold.

In verses 8-10 of Luke 15, Jesus goes on to tell the story of a woman who lost one of her 10 coins, leaving her with nine. Of course, the woman in the story searches, sweeps, turns all the lights on and turns over every nook & cranny of her home until she finds the coin. When she finds the lost coin she rejoices!

This parable speaks of the fervency and the persistence that Christ pursues us. He pursues us until we are found. When we are found, all of heaven rejoices. “There is joy in the presence of the angels of God over one sinner who repents.”(vs 10)

The final verses in Luke 15 tell the story of the prodigal son. The son who believed he wanted a “better”, “more fun”, “exciting”, different life from his family, asked for his inheritance early and set out on his way to sow his wild oats.

What the son found out was sowing wild oats was not nearly as life giving and fun as he thought it would be. He wound up eating & living in a pig sty. Not the kind of life any of us would imagine for ourselves. Certainly not the kind of life the prodigal son thought he would be living.

The greatest impact of this story is the love of the father for his son. The verses tell us, “But when he was still a long way off, his father saw him and felt compassion for him, and ran and embraced him and kissed him.” (vs 20)

The father ran to his son. My question is, do you know that Jesus, filled with compassion, runs to meet you, he pursues you like searching for a lost coin and he leaves the fold behind to go after you.

He is a good father, full of compassion, full of love, full of grace and mercy.

Just like the Shepherd, the woman searching for her coin and the Father, what was once lost is now found.

We were all lost. And only through the grace of Jesus’ death on the cross can we be found!

If you want to learn more about these verses and the study of the lost sheep, lost coin & prodigal son, watch this weeks Cup of Hope!

More life giving resources are available on the website! Check it out!