Out of Aces: The Story Our Eyes Tell 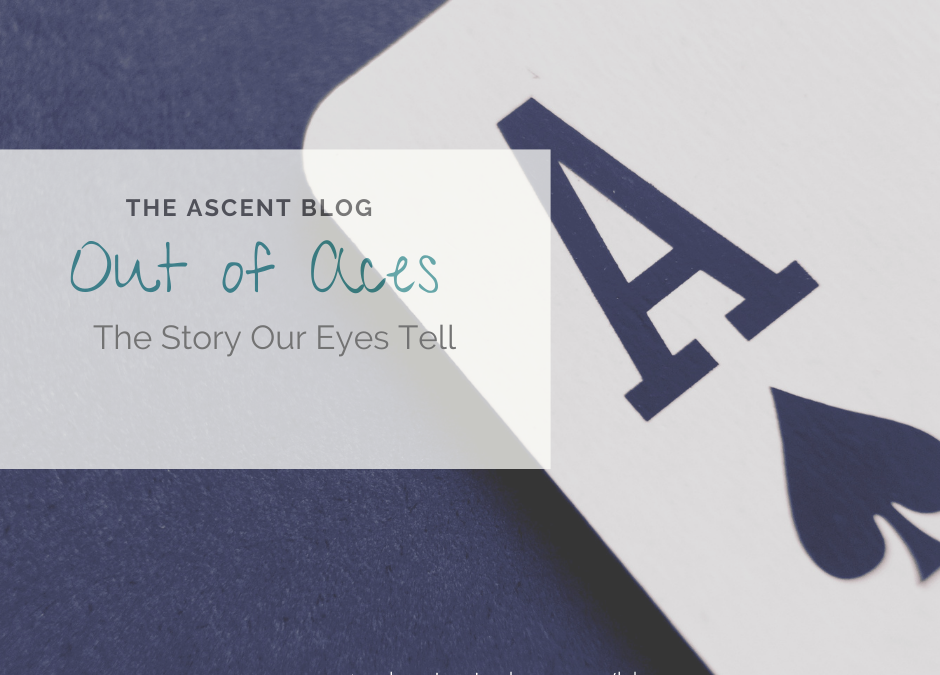 Out of Aces: The story our eyes tell

“Son, I’ve made a life out of reading people’s faces. Knowing what the cards were by the way they held their eyes.”

I’m sure you are familiar with this lyric from the vocal stylings of Kenny Rogers, called The Gambler.

The song goes on to say, “So if you don’t mind my sayin’ I can see you’re out of aces.”

The Gambler had honed a skill. He honed the skill of not just seeing but of perceiving. Perceiving and reading the eyes of people in his path. This one skill that helped him win poker games has a deeper level of meaning.

And yes – I am using the Gambler as a Biblical lesson! There’s a first time for everything!

There are a few people I have met in my life that when our eyes met I felt like I was staring at the face of Jesus.

She survived a horrific motorcycle accident. She now lives with two fully reconstructed legs and a prosthetic foot. She actually has computers in her legs! She is a walking, talking miracle.

Sheila lost everything as a result of the accident. Marriage. Career. Home. Lifestyle. Health. And more.

I had the recent privilege of interviewing her on the Bloom Today show. I was awestruck when she said, “I wouldn’t trade all the losses for the gift of God’s presence in my life.” Wow.

Sure…she says that, but doesn she really believe it?

When Sheila said these words, I could tell she wasn’t bluffing. I’m pretty confident in my “bluff-detecting” abilities! She wasn’t just saying all the right “christian-ese” words. She was not putting on a show or pretending that life had been easy.

Sheila wasn’t out of aces. Sheila found the one ACE that made all the difference.

When all was lost Sheila found Jesus.

Sheila’s eyes tell the story of a woman who’s been healed from the inside out.

Authenticity is read loud and clear through the eyes. Even the Gambler knew that.

Someone once said, “the eyes are the window to the soul.” I tend to agree with this.

Our eyes project what resides in our hearts. Our eyes communicate a lot without using any words, just ask my kids, ha!

What I love most about Sheila is her authenticity. I love how she radiates Jesus through her eyes. Her eyes are captivating because they project LOVE, HOPE & CONTENTMENT.

Matthew 6:22 (KJV) says, “The light of the body is the eye: if therefore thine eye be single, thy whole body shall be full of light.”

When everything was stripped away from Sheila, her health, her body, her career, her marriage, her home and comfortable lifestyle she was left with only one thing.

Sheila’s singular focus on Jesus has filled her entire body and she now radiates the love, compassion, hope and grace of Jesus Christ.

And just as some may say the eyes are the window to the soul, the Bible proclaims this truth, “I pray that the eyes of your heart may be enlightened, so that you will know what is the hope of His calling, what are the riches of the glory of His inheritance in the saints,” (Ephesians 1:18 NASB).

If someone looked into your eyes today what would they see? What do your eyes project?

Would people say about you what was said of the disciples, “When they saw the courage of Peter and John and realized that they were unschooled, ordinary men, they were astonished and they took note that these men had been with Jesus” (Acts 4:13 NIV)

The next question is, what do you see when you look in the eyes of others? Are you able to not just see but perceive what a person is walking through. May we be a people God can use in this way.

May we not, “be ever seeing but never perceiving, and ever hearing but never understanding.” (Mark 4:12 NIV) May God give us eyes to not just see with our eyes but to give us his vision that comes through our hearts – the intimacy with him, that we can perceive the needs of those around us.

If you have been inspired by her story, I recommend picking up a copy of Sheila’s book, One Foot In Heaven! Her episode on Bloom Today will air sometime this fall. I will keep you posted about that!

Be encouraged today to soak in the love of Jesus so his love & light can shine through your eyes!