Power, Reach and Presence of God 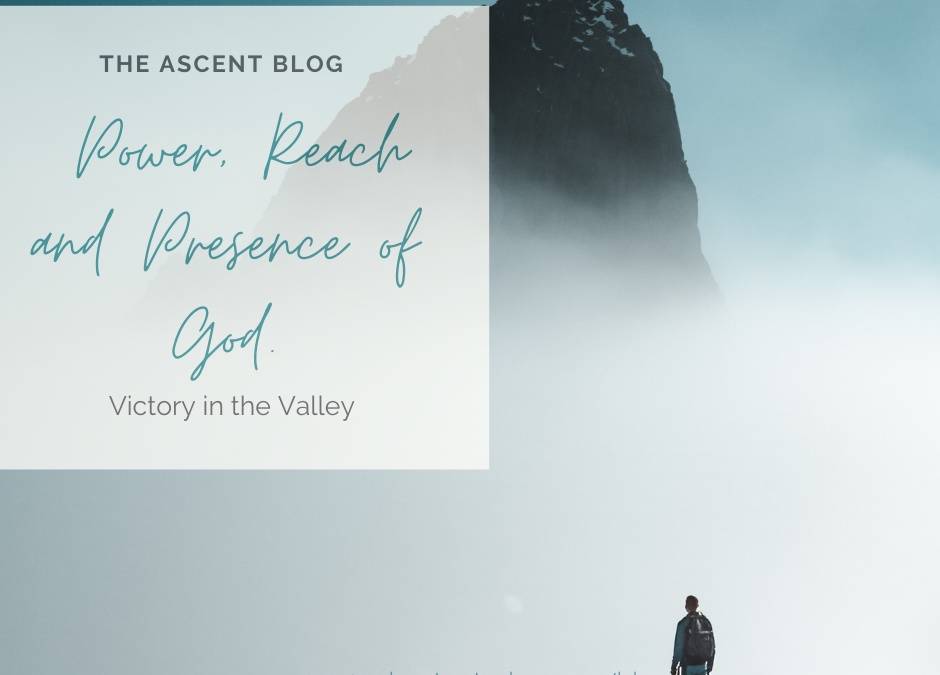 Power, Reach and Presence of God: Victory in the Valley

And then it hit me, like a ton of bricks. “Satan thinks that he can trap us and cause our faith to stumble in the low valleys of life.The valley’s are the places he thinks he will win.”

I was reading 1 Kings 20. This is a battle story. A story of king against king. This was a story of a king who had God on his side. King Ahab of Israel had a prophet of God prophesying to him in the moment he needed it the most, the moment before he walked into battle in a valley.

The prophet told King Ahab, “This is what the Lord says: ‘Do you see this whole huge army? Watch, I am handing it over to you today so that you may know that I am the Lord.” (1 Kings 20: 13)

The king of Aram and his people, who were taunting and pursuing war with King Ahab, had misinterpreted the power of God, the reach of God and the presence of God.

Their misinterpretation and lack of knowing God themselves led them to make assumptions about what was possible with God.

1 Kings 20:23 says, “Now the king of Aram’s servants said to him, ‘Their gods are gods of the hill country, that’s why they were stronger than we were. Instead, we should fight them on the plain; then we will certainly be stronger than they are.”

The King of Aram’s servants gave advice by their human wisdom. They touted, “of course they were stronger than us, they had the god of the mountains on their side, so let’s take them to the valley.”

But of course, the one true God is not confined by human parameters or perimeters.

And of course, fighting a battle on the side of a mountain looks quite different than fighting a battle from the flatlands of the valley. Different skills, scouting, weapons may be necessary to win. However, the servants of the king of Aram were misled, and in turn misled their king.

The God who helped Israel win the war on the mountainside, is the same God who would help them to win the battle in the valley.The scenery may change, the methods may change, but God is the same.

As we read on in the story, verse 28 of 1 Kings 20 says, “Then the man of God approached and said to the king of Israel, ‘This is what the Lord says; because the Arameans have said: The Lord is a god of the mountains and not a god of the valleys, I will hand over all this whole huge army to you. Then you will know that I am the Lord.’”

Let’s pause here and sit back in our chairs. Soak in this next thought.

Your victory in the valley is a teaching moment for those who can’t conceive that God is also the God of the valley. Your victory is not just for you. It’s for others to see & know the one true God.

It was meditating on this verse that it hit me. Our enemy does everything he can to keep us stuck in our valley. He wants us to feel defeated. He wants us to believe that God’s reach doesn’t come to the low and messy moments of our lives.

Satan misleads us, just like he misled the king of Aram.

Our enemy wants us to believe that God’s presence doesn’t meet us in the low moments and that the only choice for the valley is defeat.

Defeat is not a part of God’s vocabulary. And God’s power, reach and presence extend to us no matter where we are. He meets and brings us to victory at our lowest lows and our highest highs and everywhere in between.

God will use the valley moments of our lives to demonstrate his power to us – just like he did for king Ahab and the king of the Arameans. He says, “Then you will know that I am the Lord.”

This story of physical war reflects the spiritual war that rages around us. Every moment of every day. Whether we want to recognize it or not, there is a battle.

I am grateful that we get to serve a God whose power, reach and presence are not limited. His power is incomparable. His reach extends into every situation. And his presence is found in all of creation.

Consider the mountain moments of your life. It seems obvious to believe that God was in those moments. Doesn’t it?

Now, consider the valley moments of your life. Is it hard for you to believe that God was in the  valleys?

Is it hard for you to believe that just as God set your feet upon the height of the mountain top and gave you victory there, that he will also give you victory over the valley? In fact, walking through the valley is a great victory.

What is the battle you are facing? Are you walking through a valley season?

Maybe the valley you are walking through is far longer than you ever believed it could be. And yet, there you are. Smack dab in the middle of it – with the heights of the mountain tops moments from your past around you.

In short, yes. I believe with all my heart valleys are not forever, but sometimes the season is longer than we hope. But what I don’t want you to miss from this story is that God is God of the valley.

God is God of the valley and the mountain. The work that He can do in and through you in the valley is powerful because He is powerful. His presence will be there with you. And His reach extends to you – even in the lowest parts of your life.

Don’t allow Satan to have a foothold and convince you that your valley is too far for God, or too low for God to reach, or that His presence will not be with you there.

God’s power, reach and presence are with you. They are all around, mountain top or valley low.

I want to leave you today with a short prayer. Will you join me?

Lord, I come to you confessing that the valley’s of this life often seem longer than the mountain tops. Father, may we be more convinced than ever that you are LORD over the valley’s as well as the mountain tops. Help us to never doubt your power, never limit your reach or ignore your presence in our lives and every situation. Father, work in our hearts so our valley moments are usable as teachable moments for those around us who need to know and experience who you are. You are the God of their valleys and mountains too. May many come to know you through our struggles great and small. May you receive all the Glory! In Jesus name, amen.