Stay: Commit, Prepare and Lean In 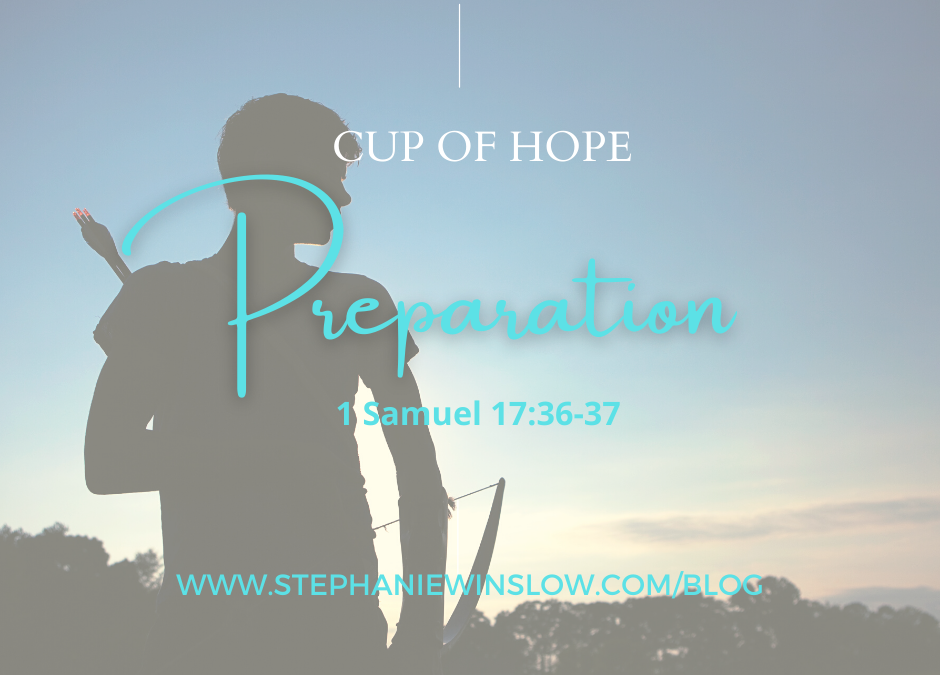 Cup of Hope: Stay: Commit, Prepare and Lean In

Abraham Lincoln said, “I will prepare and someday my chance will come.”

Growing up in Illinois, the history of Lincoln was integrated into my growing up experience. This quote, in particular, was spoken in my home often. Prepare. Prepare for what?

I doubt when Lincoln said these words he knew the impact his life, decisions and leadership would have on our nation. I doubt as a boy he thought, one day I will be President of this great land.

Instead, I imagine him having a hunger for learning, a passion for knowing God and following God’s plan, working hard, and having the courage to walk through the next open door.

I saw my parents follow in the footsteps of Lincoln’s wisdom. They prepared, they worked hard, they kept watch for open doors and made the best of every opportunity presented to them.

My mom’s passing has opened my eyes to see just how profound impact can be by living in and living out of the gifts God’s given us. My mom was tender-hearted and compassionate. She genuinely cared about people.

The years of preparation translated into impact. It’s been an impact that has only been realized since she has been gone. The flood of calls, texts and cards have been overwhelmingly beautiful. I recognize that the chance that Lincoln was talking about, is the chance to live as my mom lived.

My mom was true to how God made her, she made the best of the gifts she was given, and stewarded them well. Because of her consistency, because of her decision to lean into her gifts, and experiences her chance came. And what an impact she has made on this world.

Perhaps we have seen too many movies or have been jaded by the viral video phenomena and social influencers who have seemed to shape our perspective about what it means to prepare, to work hard, to lean into opportunities when they come. These outlets shape our minds to think if we aren’t instant successes then it’s not worthwhile. If it doesn’t translate into followers and cash then it isn’t significant.

Real life is not instant success. Real impact is not a flash in the pan viral video. Eternal impact, the kind where people are transformed, hearts are softened and lives introduced to the God of the universe – this is the impact that matters. This is the impact that requires preparedness, commitment and leaning into opportunities.

This week on Cup of Hope we are concluding our study on the topic, Stay when it’s easier to run away. We have discussed twelve Biblical characters who each have taught us how to stay instead of running away when the going gets tough.

There are three important lessons we learn from Ruth, David and Jesus.

Ruth teaches us the importance of commitment. In the book of Ruth, she is faced with loss and grief. In the midst of this loss she is faced with a decision. Stay and commit to her mother-in-law, which means committing to a new land, new customs, new culture and new God.

Ruth has two choices. She could go home to her own land, and “obey” her mother-in-laws urging. Or she can stay committed to the left her family to cleave to.  In Ruth 1:14 we read, “And they raised their voices and wept again; and Orpah kissed her mother-in-law, but Ruth clung to her.”

This section of scripture is titled, “Ruth’s Loyalty.” Ruth stayed and held onto the promise, she held onto the commitment made, and would not let even death deviate or distract from that commitment.

We find out later in the book of Ruth that her loyalty and commitment bring great blessing, not only to her, but to Naomi, and eventually to the rest of the world. Commitment is a character trait that runs through this family line.

We see the commitment of David as well, even as a young shepherd boy. David was committed to do a great job at the job he was called to. David was committed to following the ways and commands of God. And as such, he stepped fully into his calling as King of Israel through months and years of training on the battlefield of a sheep pasture.

In the pasture land David encountered many giants – bears and lions – predators that would try and snatch away his flock. In these encounters, David, like Ruth, had a choice, he could intervene or flee to protect himself.

These trials on the battlefield of the pasture taught him that God was with him. He developed the strength, the resilience and the heart of a warrior. An in 1 Samuel 17, we find Israel in desperate need of a man with a warrior heart to fight against Goliath.

David is just the warrior for the job. 1 Samuel 17: 36-37, is David speaking to Saul in expression of his desire to face and fight Goliath. “​​ Your servant has killed both the lion and the bear; this uncircumcised Philistine will be like one of them, because he has defied the armies of the living God.  The Lord who rescued me from the paw of the lion and the paw of the bear will rescue me from the hand of this Philistine.”

David in his commitment to the heart of his God, and to the job he had been assigned was prepared now to face the biggest giant of all.  David trusted his preparation on the battlefield of the sheep pasture. Even if no one else believed it, he stayed committed and trusted his experience and training with God.

Like David, Jesus spent the first thirty-three years of his life training, walking through trials, learning and trusting his experience with God to lean into the call that was placed on his life, the call to be the sacrificial lamb, who would take away the sins of the world.

Jesus spent his years on this earth training for the day when he would take the long journey down la via dolorosa. He walked willingly step by step down the way of suffering. With each step, it was his own choice.

In Mark 14:41-42, Jesus is in the Garden of Gethsemane praying. Desperately praying to God for strength, praying that if there would be any other way, let it be so. Along with this desperate prayer was the sight of his disciples, the ones he had poured into the most, resting.

“Returning the third time, he said to them, ‘Are you still sleeping and resting? Enough! The hour has come. Look, the Son of Man is delivered into the hands of sinners. Rise! Let us go! Here comes my betrayer!’”

This pivotal moment Jesus made a choice to lean in. He leaned in, taking one step in front of the other. He leaned into his commitment to God the Father, trusting that there were greater things on the other side of this horrific experience he would have to walk through.

Jesus leaned into his experience with God, and trusted that God’s spirit would carry him through. He trusted God’s Spirit would be his strength. He chose to stay, embracing the heart of a warrior, who would fight on behalf of all mankind against the evil one. Jesus trusted his training, knowing he had fought the evil one before, and now he was going to lean into fighting him one more time. This time, just like David’s Goliath, it would be a battle of once and for all.

Father King, help us, your sons and daughters to stay committed to you, to trust in the training you have walked us through in our life experience and lean into the plan and calling you have on our lives. I thank you for teaching us what it means to stay, when it’s easier to run away or go our own way. Thank you for the examples of the men and women in the Bible who presented us with valuable and transformational lessons of courage, resilience and loyalty. God, we recognize that we are nothing without you. Help us, like Ruth, cleave to you. Help us, like David, recognize the opportunities you have given us, and help us to be like Jesus as we lean into the call that you have placed on our lives. In the strong name of Jesus, Amen!