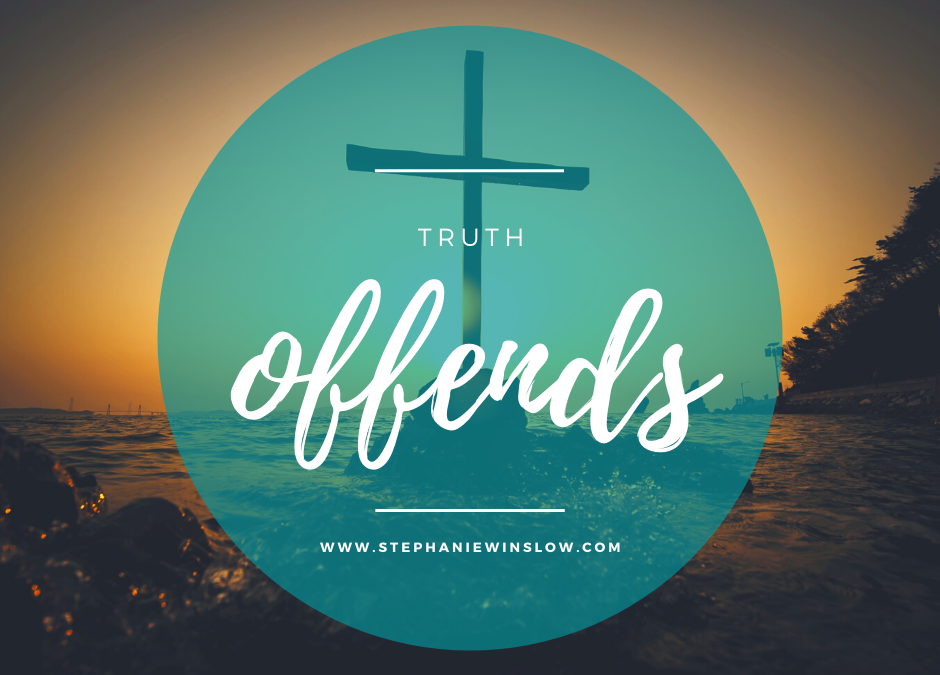 One of my daughters has claimed the family volleyball as her own. She believes that no one touches it, uses it or looks at it without her permission. She has argued this to the point of tears. She believes it to be true from the depth of her heart.

But just because she believes it – doesn’t mean it’s true. He belief that the volleyball is hers exclusively, doesn’t make it any less belonging to the rest of the family. When it gets down to it, she was just wrong.

My daughter’s “truth” that claims possession over this ball seeks to usurp the “family ball” status that it actually has. It seeks to take what was given as a gift for the family to enjoy together and makes it a point of contention, isolation, and restriction.

The REAL truth about this ball offended my daughter who wanted this “discussion” to go her way. She convinced herself the ball was hers and hers only – she could not see another way. The truth she created shaded and shaped her view of reality.

How often do we take “our truth” and make it “THE truth”? How often are we afraid to accept the truth because the truth of what it is offends us, makes us uncomfortable or pushes outside of our own thinking.

God’s word pushes us outside the parameters of our own thinking.

In fact we read in Isaiah 55:8 (NLT), “My thoughts are nothing like your thoughts,” says the Lord, “And my ways are far beyond anything you could imagine.”

I wonder how often God gives us His thoughts, and we are offended into inaction.

Truth, offensive as it is, is the foundation for faith in Jesus Christ. And without truth there is no hope.

Theologian Francis Schaefer said, “Christianity is realistic because it says that if there is no truth, there is also no hope.”

Friends, we are living in a world that claims truth is relative. Truth is what each individual decides it is. Truth is based on feelings, moods and whims of desires and cravings. Yet, is a truth that wavers a truth at all?

If everything is true, then nothing is true. At least our own relative truths are effectively false.

Truth left in the hands of humans would ebb and flow based on fleeting emotions, limited wisdom and temporal understanding.

Truth left to humans insight It would shift like sifting sand from moment to moment based on who the loudest influencing voice that strokes the egos, desires and cravings of the flesh at the time.

We see from the beginning of the human race Satan’s plot to twist the words of God, just ever so slightly, so that the interpretation is believable. Satan said to Eve in the garden of Eden, “Did God really say, ‘You must not eat from any tree in the garden?’” (Genesis 3:1b)

The answer is no. Just no. That is not what God said to Adam and Eve. But the slight twist of words opens the door for doubt.  Doubt that what we heard from God wasn’t exactly what we thought we heard. Or what we heard from God – surely He didn’t mean it. Or just plan disbelief, or willingness to accept what God did say – without our subjective interpretation.

Truth is truth. If it is flexible, then it isn’t true. God’s word isn’t flexible. His word is fact.

His truth will displease those in opposition to Him.

We need to accept the fact that He knows what best and we don’t. It’s just that simple.

Hebrews 4:12 says, “For the word of God is living and active and full of power [making it operative, energizing, and effective]. It is sharper than any two-edged sword, penetrating as far as the division of the soul and spirit [the completeness of a person], and of both joints and marrow [the deepest parts of our nature], exposing and judging the very thoughts and intentions of the heart. (AMP)

Hebrews tell us that God’s word also judges every thought and intention. It gets to the deepest parts of human nature. Yep, this makes a squirm in our pews.

It’s far easier to accept what feels “accepting” and “loving” based on the standards of the world, but the relative truth of the world doesn’t produce for us eternal glory, it doesn’t give salvation.

The truth the world believes didn’t die on the cross because of it’s GREAT LOVE for us, like Jesus did. (John 15:13)

Yet, we seek a truth that satisfies our motives, desires and agenda for the moment.

And sacrifice a relationship that is far more satisfying than anything this world can offer. A relationship based on the firm foundation of THE TRUTH.

1 Timothy 3:4 (TLB) says, “God wants all people to be saved. And he wants everyone to know the truth.”

As a firm believer in the Bible I can only claim God’s truth, not my own. How I feel about it matters little when compared to the maker and creator of the heavens and earth.  I’ve tried to live according to my truth, or the truth the world offered to me. My truth and the worlds left me empty, lost, broken, isolated and dissatisfied.

If you are a believer in Jesus Christ, I challenge you today to stand up for the TRUTH of God’s word. Would you have the courage to ask Him to expose any areas of your life that you are following the patterns of the world instead of God’s best for you?

If you are offended by God’s word would you have the courage today to talk to Him about it. Ask Him to show you where you may be misinterpreting what He is saying.

For a resource that will draw you closer to God, www.stephaniewinslow.com/books